Last time we talked about how the new Olympic quad is truly underway. Let’s now go deeper into the rabbit hole and figure out what goes on behind the curtain of building sporting success.

Obviously, every team wants to be successful: to be champions, world champions and to stand on the podium of an Olympic games. Athletes give it their all, give up their time and energy to be the best. So, if everyone is trying to do the same, how come not everyone wins, and more so how come at the top there are more and more repeat winners?

Every Olympic gold medalist started as a beginner, so how do some go from zero –> hero and others not?
Every athlete must have a vision and then a system to help them achieve that vision; simply put, the process should look something like this:

Although we all know in life, it is never that simple and probably looks more like the picture below: 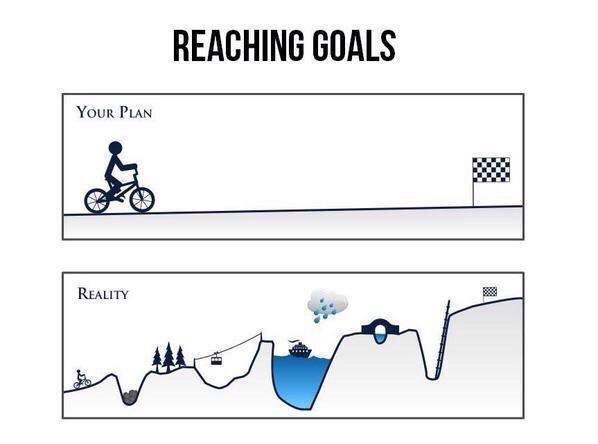 Copyright: „Your plan vs reality“, by Unknown Author: PSA Advisory

But how do you become a high performer? There is the idea that if you do something for 10,000 hours, you can become world class at the thing you practised. However, with the development the Deliberate Practise Theory from Psychologist Anders Ericsson (1993), now many coaches believe this number could be halved to 5,000 hours. It all comes down to where we put our focus and what we value.

Do we value Efficiency or Effectiveness?

If we place efficiency as our top value, what we create is motion. We always get better at the thing we practise. Then, we move onto improving the next thing, and then the next. But does that improvement bring us closer to our vision? And does the vision put value on what is truly valuable? If not, then it is just extra things to do which takes away from the limited amount of time, energy and focus an athlete can give . However, If we place effectiveness first, we create progress.

Effectiveness is deciding what is important, and focusing on achieving that first. The difficult part here is to not be distracted from what is important. Many athletes think they need to do an extra training each week, more co-ordination work, include the newest fads (brain training, new workouts from Instagram, something your learnt on a course, suction cupping, a massage gun or supplements ect.) These things often are distractions and we end up prioritising on too many things. Jim Collins in his book Good to Great: Why Some Companies Make the Leap and Others Don’t says “If you have more than three priorities, you don’t have any.” So: focus more, on less.

The problems of getting distracted by efficiency are seen in the video below. the changing the traffic lights to just red and yellow (the system) has made the drivers (the athlete) more efficient at driving (exercises/technique).

The driver feels he is doing better and says: „Man, I’m making record time“  although he has no goal and isn’t actually achieving anything, so its impossible to be effective. The sense of achievement he has for driving efficiently is just the ego talking. The job of the ego is to make you feel good by giving you more confidence and belief. However, belief without evidence is a problem that makes it difficult to know where you currently are in this gap between reality and your goal. It’s only when we have time to reflect can then ask the question: has it been effective and brought you closer to your vision?

The athlete thinks about what they want to achieve and they think with hard work and efficiency they will eventually reach it. But this is naivety. A big part of what makes the equation work is missing „The harsh reality„. The harsh reality is, you have to understand exactly where you currently are. You cannot start to bridge the gap between where you are and where you want to be, unless you know 100% where you are.

This is the job of the coach to be truthful in evaluating the athlete so they know exactly where they are. Now it’s up to the coach to develop the appropriate system to achieve the athletes vision. Only then can the coach decide on what the „big rocks / values“ of the system are. This allows the athlete to invest their time and energy on the things that give the most bang for their buck.

There are no high performers without a coach as the coach points out the things you don’t notice, being outside of the system (outside the court) allowing the coaches to look in and evaluate the athlete, giving feedback to make the athlete aware. So the classic coaching-isms „step back and try this“, „making a logical point“, „bring simplicity“. This is difficult for players to do themselves, as they are always in a state of moving and doing.

Inexperienced coaches or players are still very much in this moving and doing phase. That allows them to easily coach beginners who are in the phase of learning as their skills need to be taught and built up. As athletes progress and inexperienced coaches continue to add more areas of priority, this causes a chasing of efficiency in areas which might not be effective to the overall vision. High level coaches also add but, they don’t forget to subtract things that are not valued to be effective. This gives the athlete space to reflect more on achieving their values: „sometimes its better to stand still, than move in the wrong direction“.

So the greatest skill of good coaches is the ability to lighten the load of the accumulated knowledge on the athlete. Thus preventing the athlete from valuing too many things, overloading the athlete as priorities fight against one another. This is the job of the coach’s system; to create a delicate balance of adding and subtracting which things to focus on.

Focus on Improving the Middle

In my last article we spoke to Julian Hörl about his winter season plans and where his focus will be; his response was to get better at his basics. To think about an average game, the majority of actions/balls are in the middle of your ability. It’s not always the most difficult passes, the most difficult spike, and it’s also not mostly receiving and digging easy balls. So, the middle is where the most improvement actually lies.

Copyright: „Those who don’t know their basics are busy with motion not progress.….“, by Richard Young: simplify2perform.com

The graph above shows that our priorities at the bottom and top of the game should be limited. An example of training the bottom area would be volleying the ball back and forth parallel to the net. Whereas, on the top side this would be training to work on attacking 2nd balls or extra stimulus like playing with 2 balls at the same time. Obviously, there are small transfers but they just don’t happen enough in game to allow us to utilise the efficiency from training it to be used in the game (it’s not truly valuable). If you over-prioritise these things in training, it may look impressive, but it consumes our attention and time so much that we lose out on being more effective at what matters.

When it comes to the big movements in a game, high performers know to focus on the middle. They have mastered what works for them, and know they can deliver what is needed because they have done it before from evidence in training and past matches.

This week was an overview of creating vision with a system designed for effectiveness. Next week we go into what factors you need to consider when building your own vision and system.