During the last 10 years, beach volleyball has experienced quite a 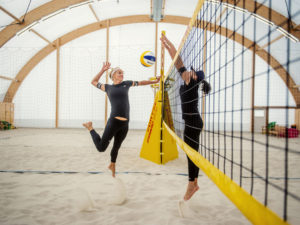 significant boom in the Czech Republic. Competitive players can participate in the national tour almost every weekend, including
winter months. Amateur players can often choose from three different tournaments organized at one day – at least in Prague, the Czech capital. I can count 14 beach volleyball halls in Prague and I am
sure I forgot some. That means more than 60 courts for players willing to play our sport in winter times.
But it is not just halls, it is also many teams offering trainings for players from all age and skill groups. Every Prague team has between 200 and 500 children and youth athletes, which sums up to thousands of children competing either in Prague league, or in youth national tour. However, Czech beach volleyball is not just about the biggest city. There are teams and halls in smaller towns as well, often operated by former players and beach volleyball enthusiasts. Let me mention a beautiful
venue Beachwell in a small town Pelhřimov, which hosts Timeout camps in winter.
I have been working for the Czech team called Beach Service since 2013, when the team was founded. One of our goals is to offer beach volleyball to as many players as possible and currently,
we run trainings all year long in five cities. As a team, we have been able to win national clubs championship twice. Every year we secure number of medals from national youth championships
and we send our players to represent the Czech republic at youth European and World championships. Since last season we run a unique project for the most motivated youth players, allowing them to train at the highest level. These kids from different cities participate in two to
three training camps every month, improving not only their beach volleyball skills. We have been supporting adult national team players, as well. Speaking of professional players, let me mention the best Czech teams. Markéta Sluková Nausch
and Barbora Hermannová form the best women’s team. I believe they are also quite popular among Austrian fans, either due to their 2018 victory at FIVB Major in Vienna, or thanks to their Austrian
coach Simon Nausch. Ondřej Perušič and David Schweiner are by far the most successful Czech team in men’s category. Last year, supported by home crowd, they secured silver medals at 4* FIVB tournament in Ostrava, where they lost in three sets to Norwegian team Mol/Sorum. Both mentioned teams are on a good way to qualify for the next year’s Olympic Games in Tokyo.
However, the situation is not only optimistic in the Czech Republic. It is extremely difficult to get financial support and to do beach volleyball on professional level, which is one of the reasons why
many Czech teams struggle to reach an international level and why most of the players quit elite level of beach volleyball after finishing their studies.